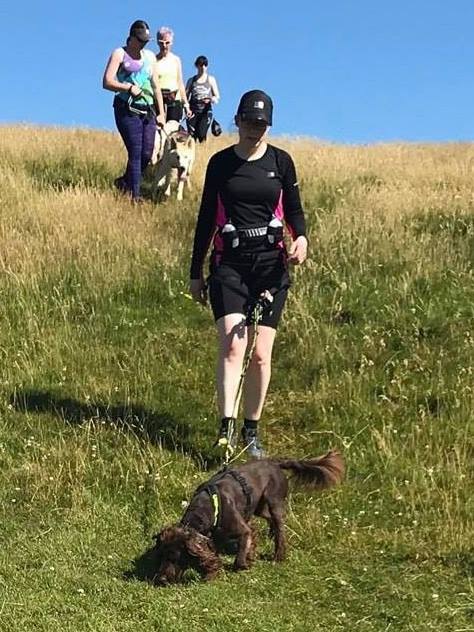 Lousie and Henry are regular Cani-Fitters at our Ayrshire classes. Louise has Kindly shared her story with us and how exercise and in particular running with her dog Henry helps her with her mental health .

“I have struggled with my mental health for most of my adult life. It’s hard to know exactly when my mental health problems started. For as long as I can remember I have been a perfectionist and a generally anxious person. I can get easily upset and derailed by things like changes in routine.

For a while I never attached any significance to this, until for no apparent reason I suddenly found myself crippled with anxiety at work.

My GP referred me to the community mental health team. But nothing I tried seemed to work.

For three years, I spiralled further into an abyss. I was dangerously underweight, in and out of hospital and attending A&E more times than I can count.

I enjoyed keeping fit before my mental health deteriorated, going to the gym, running and hill walking at the weekends. I struggled with an eating disorder which curtailed this greatly, and at points exercise became just another weapon in the arsenal I used to self-destruct.

I also started to think towards some gentle physical activity, and getting a dog seemed like a good way to get myself out and about a bit more.

Henry, a cocker spaniel puppy was a much welcomed edition to my home. Encouraged by an ex-colleague I signed up to Cani-Fit, a running club with dogs.

Going along to our first class wasn’t a decision I made lightly. For years, any group situation I had found myself in was facilitated by a mental health professional; where help was at hand should I need it.

I was terrified. Even now I still struggle with anxiety during classes. But overall it has been terrific. Not only have I rediscovered my love for running, but I’m also running socially, albeit with Henry as a crutch.

I’m slowly starting to get to know other people in the classes I attend, and feel more able to chat to them. Dogs are a great talking point.

Cani-fit and Henry have given me the confidence to set out on my own once more and I’ve recently completed my first ever cross-country 10K run. Henry was even there to greet me at the finish line.

Since getting Henry I have spent some time in hospital, but his canine sensitivity to my emotions and the companionship has meant that I’m better equipped than ever to overcome whatever hurdles are put in my way.

I’m here to say that between Henry, Cani-Fit and running, my mental health is better now than it has been in over a decade. ”