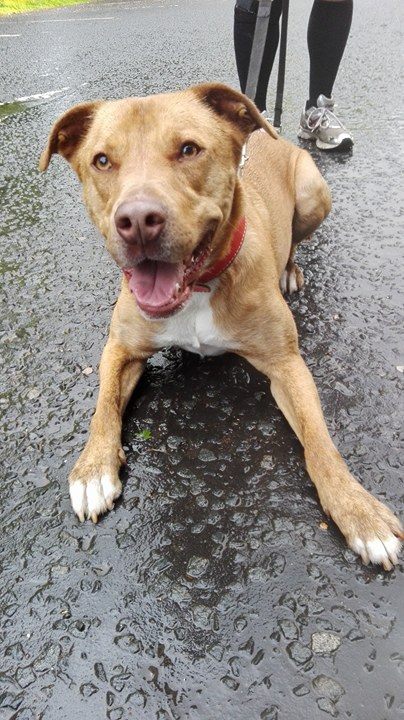 THIRTY KILOS OF TERROR ! I think may have been a phrase I used to describe Angus when I first contacted Lindsay to see if she would accept Angus into Cani-fit but before we get into our Cani-fit journey so far let’s take a step back.

I have had dogs for over 30 years and we rehomed Angus knowing that he had the potential to be a difficult dog but I had experience with this type of dog specifically and had taken difficult dogs in the past. We took Angus at 8 weeks and I assured my wife, who had some reservations about taking Angus on, that he’d be an exemplar of canine good citizenship. We’re not there yet but thanks to all the people at Cani-fit we are heading in the right direction.

So determined to raise the perfect canine citizen ( and break the staffy cross stereotype and misconception) I got Angus out as soon as possible and made sure he met and played with every other dog possible. Then circumstances changed, a new baby and our other dog lost most of the use of his hind legs (meaning separate walks for the dogs). That meant I could not spend 2 hours a night standing chatting to other dog owners whilst Angus got to run about like a loon and play with every other dog until he finally became exhausted. So he went on the lead more and he did not get to play with every other dog. He got frustrated because he could not do what he had done for the first 18 months of his life. This led to a major case of leash reactivity. Oh and I don’t mean a bit reactive as in he barks a bit if another dog gets too close I mean full on psycho attack dog when another dog gets within 30 yards; he is terrifying. He’s still friendly but so frustrated at not being able to run off and play that it manifests in a terrifying display.

Now jump forward 18 months and I have tried everything, all sorts of training and behaviour modification work all to no avail. Angus needed to get exposed and closer to other dogs but initially at a safe distance where he could remain calm and under threshold and most importantly the other dog owners needed to be accepting and understanding of his behaviour. Dog training classes and dog obedience/ agility classes were out because we would need to be too close to the other dogs and he could not cope with this.

Then by chance I discovered Cani-fit and I contacted Lindsay explaining about Angus’ needs and my concerns, not about Angus, because he is friendly if he gets to another dog but his impact on and the perception of the other dog owners. Lindsay suggested that we started with a 1-1session so as not to overload Angus and to assess his behaviour in the flesh.

Enter stage left James and BB. Now I can’t say enough good things about James. James had started Cani-fit for very similar issues with his dog Widdle. He understood about having a dog that has special needs and is a social pariah ( Widdle not James, James is a very nice man ☺ ).

We met in a car park of a country park and had a brief chat about Angus and cani-cross, there had been emails between myself and Lindsay leading up to this which she had shared with James. Then James met Angus and a few minutes later we were all harnessed up and ready to go. Session 1 went well and we arranged another 1-1 session.

Just a side note our first session was typical Scottish summer time ( yes technically we have a summer, the rain is less solid in nature) as in you could not see much more than 20 feet in front of you through the downpour.

Session 2 went even better and we decided to organise a third and hopefully final 1-1 session. Our first 2 sessions had been with James and BB; BB is a very calm unflappable dog and when in harness is focused on the job in hand. BB largely seemed to ignore any inappropriate overtures that Angus made. At the end of session 2 we could run side by side and stop and chat ( sorry debrief ☺ ) with little concern about Angus making an inappropriate lunge for BB. Something that was almost unthinkable at the start of session 1.

Session 3 was the test. Enter stage right Widdle. Now Widdle is a living breathing advert for the positive behavioural benefits of cani-cross for dogs with issues. I can’t put in to print the words that James used to describe Widdle before Cani-fit ( lots of them consisted of four letters) but now he is a dog that is comfortable around other dogs and mixes with a lot of different dogs week in week out. Widdle however does not take any “nonsense” and will let other dogs know if he finds something unacceptable. I must admit I was a little apprehensive about Angus running with Widdle and tried to get James to substitute Widdle with BB for the 3rd session. James suggested that we stick with the plan and try Widdle and if world war 3 broke out we’d switch back to BB.

Dogs out of the cars harnessed up and off we went. Not a bark, growl or lunge in sight for the full hour. Both James and I were delighted and Angus received the seal of approval and off to a group class we went.

The group classes start with a welcome and a briefing about any dogs with special needs. There were about 20 dogs and owners for this class and they were all in a loose circle around James at the start of the class. Twenty yards away were me and Angus and in the brief I think the words James used were “… and over there are Alan and Angus. Angus can get excited and look like he is going to rip your face off. Don’t worry he is friendly, he won’t. Him and Widdle get along and Widdle won’t accept a dog that is not friendly…”.

The class went well with Angus happily running with the other dogs and you never would have known he had issues. Finishing off the lesson we were off trail and running in a loose group with Angus right in the middle of 20 excited ( and tired) dogs and owners. During an earlier water break Angus was mixing with the other dogs again with no indication that he had any issues.

Angus is not “fixed” and he is still reactive on a normal walk but he has come on leaps and bounds since he started with Cani-fit. The most important thing for me now is that I can see that with more hard work he could be “fixed” and whilst he will never be described as cute and cuddly I can now see me having to retire the phrase 30 kilos of terror when describing him.

Some handy tips if you want to take up Bikejor