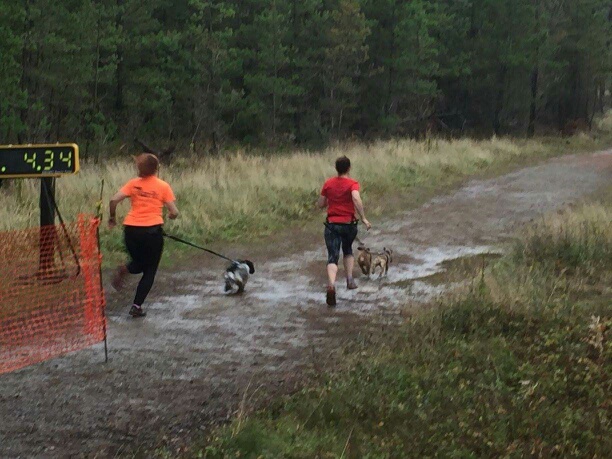 Team Cani-Fit go to Wales!
Canicross Anglesey’s second annual race at Newborough Forest had tons to live up to this year – everyone had such a great time last year….
Mighty Maisie and I were excited to be off to such a beautiful part of the country for a run on fantastic trails again. The weather was atrocious from the minute we left for the 6 hour drive and it didn’t let up all weekend. It didn’t dampen our spirits though – we are from Scotland after all – and we arrived safe and sound at Plas Gywn campsite (fantastic dog friendly site, highly recommended) on Friday evening, all set for a weekend of fun.
Saturday morning we were up and off to Penryhn Parkrun – we were late due to a postcode technicality but they let us tag along for a shortened version. We got such a warm welcome at this parkrun, there were a lot of canine runners and we later learned that they even have their own canine start line. Sounds like they’ve worked out a harmonious way for parkrun and canicross to work together here. The route is in the grounds of Penryhn Castle which was pretty awesome and the trail was nice and soft underfoot although not sure if this was just due to the deluge of rain or not!
Saturday afternoon and we headed off to cheer on Thomas at Betws Y Coed 10k Trail Challenge. Again this was another example of canicross being successfully integrated into a ‘human’ race. The trail 10k here allows canicross entrants who start off 30 mins after the main race. This year I believe there were around 70 canicross entries. It’s a gruelling trail at the best of times – with an infamous uphill start but this weekend’s rotten weather made it really tough going for everyone, but as always, there were nothing but smiles coming down off the hill with the words ’hard but brilliant’ ringing round the finish line and lots of promises to return next year.
Sunday and off we went for the main event! Canicross Anglesey’s 5.3k race at Newborough Forest. I’ve had a bit of enforced time off recently so this was actually the furthest I had run in about 6 or 7 weeks but I knew the trails here were amazing so I was excited to go round again. After a detailed briefing from James of Canicross Angelsey, we got warmed up and headed to the start line. This was the first race I’ve done where we were started in pairs and I was a wee bit apprehensive that I would be paired with something that might fancy Maisie as a snack (not prejudice, it just happens a lot when your dog is easily confused with a rabbit when running) but it was really well organised with some ski netting in between the dogs and actually they were all so focused on getting on with their race that nobody was bothering with their start line neighbours at all. It was an effective way of getting people started quickly. I started with Karen Hamilton from CSE and she was off like a rocket with her two Border Terriers, Maisie raging with me for being such a dead weight haha!
At the start of this race you head straight up a pretty steep sand dune, it’s tough going right at the start but it’s over fast and then the course is basically flat after that. The ground is soft and forgiving, the forest beautiful for running through and the course well marked and marshalled. What more can you ask for? Maisie was motoring along like a champ as always, I was very slow and feeling rather unfit but she gee’d me along and we settled into a steady pace and just enjoyed ourselves. She nailed every turn, followed every command and jumped in every puddle, pretty much a typical race with my wee star, she always puts her all into everything she does. Just a couple of unscheduled stops where Maisie attempted to kamikaze into a swamp and when we acquired an off lead English bull dog and had to stop for it’s owner to collect it.
The course was a mixture of woodland grassy trails and hard sand, all of it a treat to run on and had me wishing I lived closer! Towards the end of the race there was a slight change in course from last year. We were well warned of this though and James explained it was to keep us off the hard tarmac road and instead wound us through some more of the fantastic forest trails that we had all come to run on anyway – perfect. This final wee section was really exciting – twisty and undulating trails, you really had to think fast on your feet, Maisie and I loved it! Then you’re onto the final 300m home stretch where you can see everyone waiting to cheer you over the finish line. A beautiful local keepsake awaits you on finishing, a lovely Welsh slate coaster and if you’re lucky enough to win your class, there are amazing dragon trophies made by a local blacksmith.
There was a reason I came back to do this race again (I rarely do the same thing twice!), because it’s brilliant! Get yourselves along next time, it is worth every second of the road trip. Thanks to all at Canicross Anglesy, Penryh Parkrun, Betws Y Coed and Plas Gwyn campsite for making us so welcome. And to wee Mighty for being the best wee dug ever 😉
Thanks to Paul & Liz Taylor for some of the pics