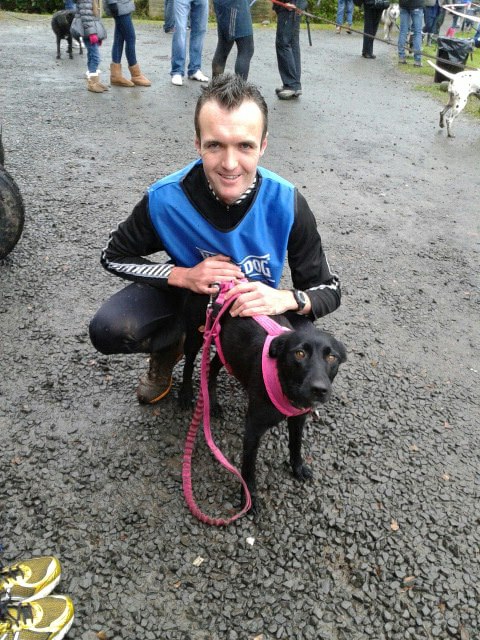 At Cani-Fit we not only get dog owners and dog lovers coming along. We have regular runners who do not own dogs who like to join in , but also we have seen our fair share of dog owners , runners who have a fear of dogs for numerous reasons.

A fear of dogs is more common in dog owners than some would think, which at times can result in dogs reacting negatively. Some of our Cani-Fitters have put their own personal experience into words.

In these situations it has helped, others may benefit from alternative training.

“I have been afraid of dogs for as long as I can remember. As a child I would often walk long detours to avoid passing dogs in my way home from school! As an adult, the routes I choose to walk and run are often determined by the liklihood of passing unaccompanied dogs.
When my Son brought Skye home from the rescue centre, I was relieved that I felt no apprehension at having her in the house she was so good natured and affectionate. I soon discovered that once I had a dog with me on my walks and runs I would become fair game for the local canine community!!
Skye was also very anxious around other dogs so we definitely fed one anothers fears!
Cani-Fit seemed a good way to socialise Skye and try and overcome my own fears so I signed up for my first class with my friend Elaine and her dog, Bram. That first day I was so nervous that I felt physically sick and this only served to fuel Skye’s anxiety and she reacted badly when the other dogs came too close. The leaders were great, they advised me on how to let Skye have her space and encouraged the other participants to give Skye plenty of space. Gradually she relaxed a bit and even allowed Bram to run beside her. She loved the running but not the rest periods and as for the head on passing…that was an absolute No No for her and I!
I booked the 4 week beginners block and Started to meet Elaine and Bram outwith classes too. Over the next few weeks Skye and I began to relax and were both really enjoying the sessions. On the last session, it suddenly dawned on me that I was standing on a narrow path surrounded by dogs during a rest time and more to the point, Skye was lying relaxed at my feet!
Thanks to Cani-Fit our walks and runs are now much more relaxed and I don’t panic when dogs approach us. I am getting much better at reading doggy behaviour and as I relax then so does Skye.
One day I would like to enter an event with Skye and I’m sure that with the continued help of Cani-Fit we will both be ready to enjoy the experience.”

“My name is Stuart Gibson and I am an athlete with Ronhill Cambuslang Harriers. As of August 2015 I have been involved in athletics for almost 20 years from the age of 12 but have specifically focussed on distance running ranging from 800m to half marathon (there have been a couple of marathons as well but the less said about them the better) on road, track and cross country since I was 17. From my mid 20s onwards, I have particularly enjoyed some success, for example, representing the West of Scotland numerous times and also on one memorable occasion, running for Scotland in a Home Countries Cross Country in Antrim. I count myself very fortunate to have run in some high quality competitions.

Where does canicross come into this you may ask? Essentially, I am someone who has always been wary of dogs. Many a time I have been spooked, whether out running or doing anything else, by dogs running towards me, barking, jumping up at me, you name it. I always feared the dog in question was attacking me, not being convinced by the (not very) reassuring “he/she won’t touch you” or similar. I also regularly see a couple in East Kilbride out running with their own dog and I often thought a canine doing an 8 miler with its owner was not good for it. I’d never heard of canicross and decided to see what all the fuss was.

I learned 3 things from it. Firstly, that taking the family pooch out a run has great health benefits for both owner and pet and strengthens the social bond between them. For example, the owner has to give commands which the dog needs to understand and respond to. Secondly, that a dog chasing you down barking is not necessarily vicious. Rather, he/she can be excited, think you’re playing with him/her, he/she could be more frightened of you, any of these things and more. I now appreciate why dogs behave in certain ways and have developed strategies to deal with situations. Now when confronted with a dog while running, I may take a wide berth, slow down to a jog or walk or even stop completely and try to interact with the dog in a friendly way. These things seem to work. I’d be lying if I said my fear was completely gone but learning about canicross has greatly helped me cope and understand canine behaviour.

Finally, I have learned that I am less talented at “running” with a 4 legged friend in tow than without. Compare my best times for 5km. A road 5km? 14:40. A canicross 5km? Approximately half an hour. There are witnesses who can vouch for this. I wish I was joking. ”

Copyright Cani-fit 2015. The moral and legal rights of the author to be recognised as the author of this work are asserted. Action will be taken against anyone found to have infringed the copyright of either the spirit or letter of this blog post